During ROV operations thirteen bronze helmets were located on the seafloor. Seven of these are in a rather concentrated area of c. 25 m2; the other helmet was found in the rocks c. 200 m to the SW and relatively close to the find location of the Egadi 6 ram. The helmets were in varying degrees of condition, most having sections missing due to corrosion and possibly post-depositional impacts as the metal is thin. Four of the collected helmets were of the same type as three discernible helmets left on the seafloor: Montefortino. This is a type of helmet common to the 3rd century BCE with Celtic origins. As the Romans had adopted this helmet by this period and the Carthaginians hired Celtic mercenaries, it is thus far difficult to assign a cultural affiliation based solely on their style. 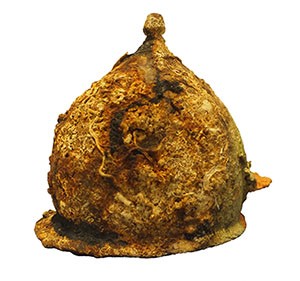 The overall wide dispersion and pattern of the helmets indicates that this armor represents the personnel from more than one vessel. Moreover, the types of helmet finds indicate that in some instances it may be only the base ring that remains; thus there are numerous helmets that will be difficult to detect. If such remains do remain on the surface, then it will require a type of metal detector or visual recording system in order to detect. 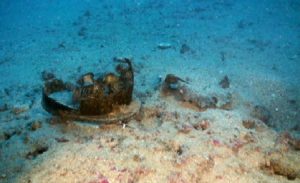