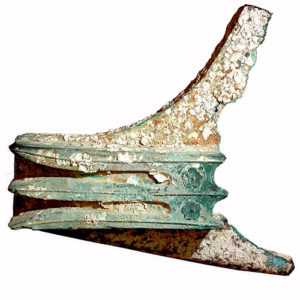 This ram has was reportedly retrieved by a fisherman from the sea north of Levanzo Island. The ram itself is intact with no major damage or deformation. No construction marks were noted on the interior or exterior surfaces. Egadi 1 has the shortest driving center of the Egadi rams, being nearly identical in length to Egadi 5, yet has the longest tailpiece and the highest mid-length height and width. Given the Egadi 1 ram’s significant increase in height from its constricted waist, it possesses the third tallest and second widest head. Its large head combined with a short driving center gives this ram a stubbier design than the other rams.

In addition to the 4 cowl attachments, there was a single attachment through the cowl nosing driven into the chock. There are no attachments on the bottom plate to affix the ram directly to the keel. The arrangement of the locations of spikes and the presence of decorative features on the fin plate are also unique. Two distinctive ‘rosette’ elements formed by a central rounded knob surrounded by 5 petals are located on the fin plates of each side; they are set in line with the fin cavities so that the spike attachments are displaced to just above and aft for the upper spike, and just below and aft for the lower spike attachments. A Latin stamp was discovered on the lower cowl nosing.