Description: Intact ram located in the northern sector of PW-A. The ram was discovered in 2012 in a state of nearly complete burial that made it impractical to attempt lifting that year.  Upon return to the site in 2013, there was a small reduction of sediment around the ram, but significant excavation was necessary.  Excavation during the 2013 field season exposed more of the ram but did not allow the lifting of the artifact that year.  During the 2014 field season, significant excavation was undertaken in order to safely prepare the ram for lifting and it was raised on July 2, exactly two years to the date of discovery. Several artifacts were removed from within the ram’s inlet prior to raising to ensure they were not lost during recovery. 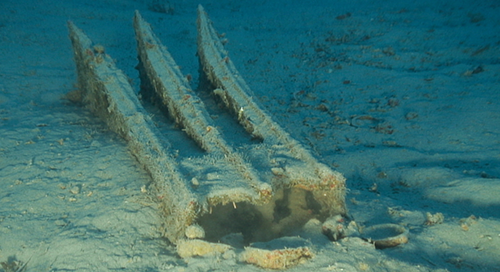 After recovery of the Egadi 10 ram it was clear that it belonged to the set of rams already recovered from the site (Egadi 2-11) in its general shape and dimensions.  The decorative feature of a Montefortino helmet with three feathers matches that of the Egadi 7 and 8 rams, as well as the inscription naming a Quaestor responsible for some unknown aspect of financing.  The ram had clearly been upright for some time early in its depositional history as there was some growth on all areas; however, after falling onto its starboard side and becoming buried the growth did not accumulate on the buried portion. The heaviest growth was on the port side, both interior and exterior. Most of its attachments were in place and not deformed indicating that the ram was deposited while attached to the warship; this is consistent with the Egadi rams 2-11 as well. Wood was also noted inside the ram along the wale pockets and near the head where the ramming timber would be located.  Samples were taken for analysis.  A large copper nail with no corrosion was located within the ram, and within the matrix of material that appeared to be rotted wood.  On the inner-face of the cowl was a graffito that was clearly made in the original wax mold.