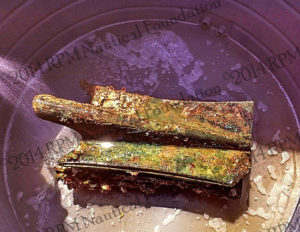 The Egadi 2 ram was discovered in 2008 within site sector PW-B, approximately 10 km northwest of Levanzo Island. A number of broken Greco-Italic type amphoras were found among rock outcrops within a 500-meter vicinity. The ram lay inverted on a flat seabed with approximately one-third buried in soft sand. The minimal amount of marine growth on the exposed bottom plate and lower fin (the upper surface upon discovery) suggests that this was not the original place of deposition. Some 40% of the upper fin in the aft portion and most of the cowl were missing; none of the breaks were fresh and marine growth covered portions of them. It seems that this damage occurred prior to the ram’s original deposition, likely as a result of a violent collision with another warship during the battle. This conclusion is further supported by the wood remains trapped between the starboard side of the lower and middle fins at the head.

The ram’s tail fins are longer and come to a narrower rounded point that on other Egadi rams. Groove-and-ridge patterns are found on the interior of the wale pockets, a product of shaping the wax model on the ship’s bow timbers. This ram has the third smallest driving center and its head height and width dimensions are the smallest of the rams found thus far. Spike evidence, and lack of deformation to the rams’ driving center or bottom place that would indicate warship timbers and ram being forcefully wrenched apart suggests that this ram must still have been attached to the wale timbers when it was initially deposit; wale timbers that have since been destroyed by teredo.