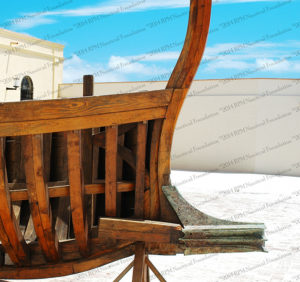 The Egadi 3 ram was discovered in 2010 within site sector PW-A, lying on its port side at a depth of approximately 80 meters. Starting at a distance of approximately 5 meters, several amphoras were found that included Greco-Italic and Punic types. Rocks, shells and other debris caused by octopus nesting filled and spilled from the ram’s cavity on the seafloor. Other than the broken fin tips at the head, and slight damange of the aft end of the bottom plate and fin tail, there are no major missing portions or damage. There are a series of v-shaped notches vertically aligned across all three fins at the head midway between their port sides and the vertical post connection. They decrease in depth from top to bottom of the fins and make a crumpled pattern formed by a forward impact. All of the damage is covered with identical amounts of growth present on the rest of the ram surfaces which indicates pre-depositional damage. 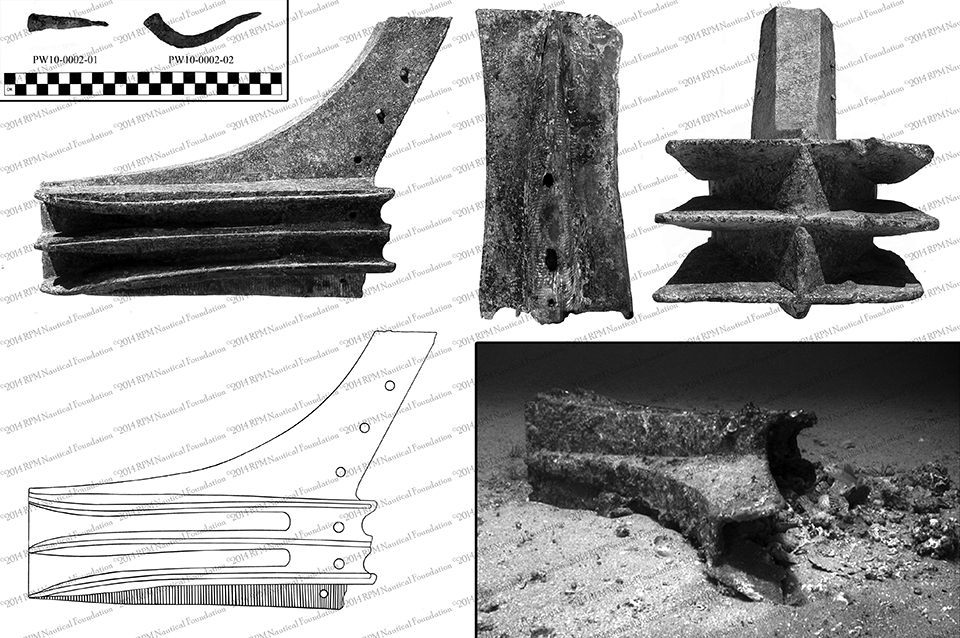 The structured light scanning (SLS) and x-ray fluorescence (pXRF) examination indicates the corrosive period or the time exposed to seawater, for all the damaged areas is equivalent to the time of exposure for the undamaged portions of the ram’s exterior. The nature of this damage is enigmatic, although it is clear that the ram struck a V-shaped metal object head-on. Since the V-shaped notches match the angle of the vertical post at the ram’s head, one possibility is a ram-to-ram collision.Compared to the other rams, the Egadi 3 ram has moderate dimensions which include an average length driving center, average head width and height. An inscription in Punic script of the 3rd century BC is located on the ram’s cowl nosing; it was made by incision with a sharp instrument that cut into the wax layer of the mould prior to casting. An experimental analysis of the Egadi 3 ram reveals a surprisingly high level of lead.