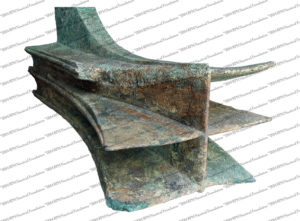 The Egadi 4 ram was recovered in 2011 in sector PW-A at an approximate depth of 80m. The ram as discovered inverted within a slight depression sitting above an intact, half-buried Greco-Italic amophora. Excavation in the close proximity revealed fist-sized stones, two of which were raised for analysis; 6 additional stones were found within the ram’s cavity. These smooth stones appear intrusive to the region and are of sizes consistent with ballast stones. Three tile fragments, a pottery sherd and an iron nail concretion from the hull were also found within the cavity; being most likely representative of the nesting habits of the local octopus. A small section of the keel was preserved in the forward section of the bottom plate. 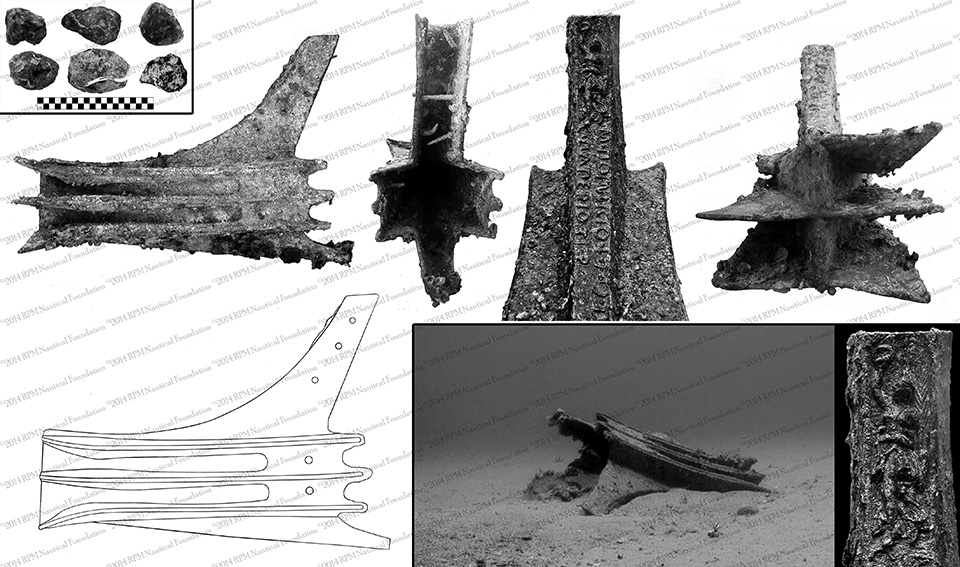 The primary damage to the ram was the missing front corner portion on the starboard side of the upper fin; corrosion and marine growth indicated an old break. The straight angle of the break without any associated deformation indicates the corner was cleaved off by direct impact to the head. This kind of sheer break would necessitate a considerable concentrated force such as one occurring in a ram-to-ram collision in which only the top fin of the starboard side bore the initial hit. The port side of the upper fin is deformed upwards, a possible result of contact later in the impact event. This is the second longest ram overall with asymmetrical shape and a significant amount of head flare. A molded decoration and inscription was located on the cowl nosing. All the bronze attachments on the cowl and driving center were preserved to some degree, extending as they do into the interior of the ram. This preservation suggests that the ram must have been deposited on the sea-floor while attached to bow timbers. Remains of wood within the starboard wale pocket and bottom place are also preserved due to the leaching of copper.

Both the Egadi 4 and the Egadi 6 ram feature a relief figure of winged female figure facing towards the starboard side is situated at the top of the outer face of the cowl. The figure is arranged upright to fit the narrow register provided by the cowl’s outer face. Her wings are folded downward and the laurel wreath is held above her head, nearly vertically, in her right hand. A sheave of wheat sits behind the figure, held in her left hand at its base.The female figure is assuredly one of two deities, or the version of a single deity, Nike or Victoria. It is my opinion that the image is Victoria based on several observations. First, the depiction of wheat in the image would more likely be associated with Victoria than Nike, who often had a palm leaf. Victoria’s origins are distinct from Nike’s, deriving from the Sabine goddess Vacuna who was also worshiped in Rome. Vacuna was an agricultural goddess that later became associated with numerous other goddesses including Minerva, Victoria, and Bellona.

M(arco) Populicio L(ucii) f(ilio) is listed at the top of the Egadi 4 Ram with the individual C̣(aio) Paperio Ti(berii) f(ilio) listed below (these same names are inverted on the Egadi 6 Ram). The Q.P postscript after the first name indicates that these two individuals served as Quaestores publici (elected public officials that dealt primarily in financial aspects). This position typically represents a first step for one seeking political office in the Republic. M. Populicius was known consul in 232 BC and may be identified with this individual so named as quaestor in 241BC. C. Papirius cannot, at this time, be identified with any known figure. This general interpretation of the inscription is predominately agreed upon by Jonathan Prag of Oxford University and Tommasio Gnoli of the University of Bologna.