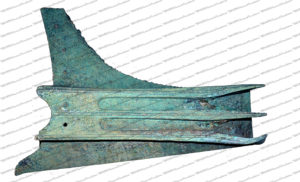 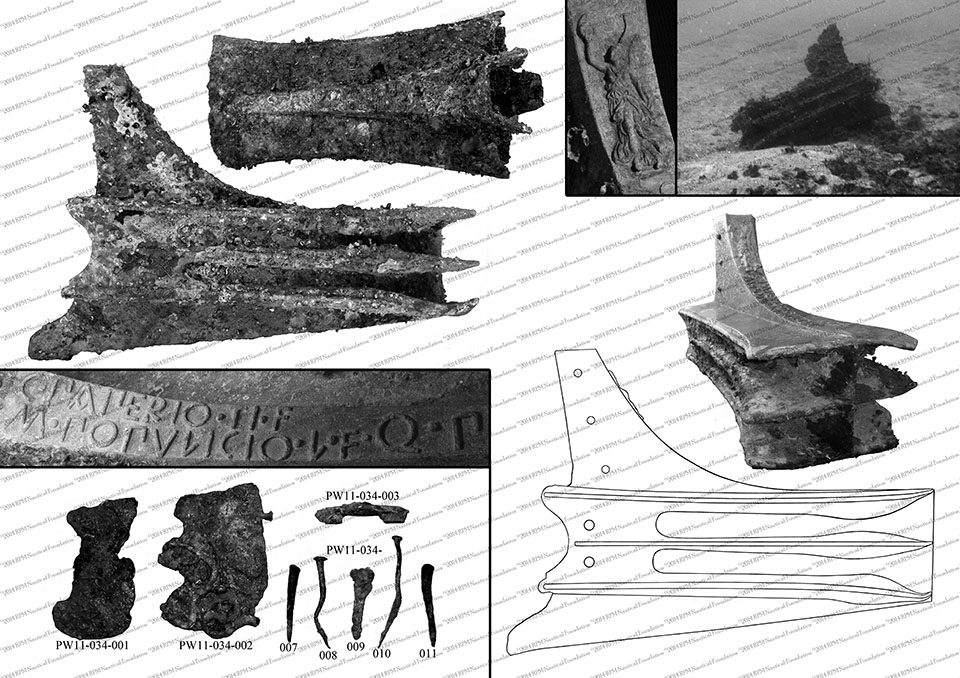 The Egadi 6 ram was recovered in 2011 in sector PW-A at an approximate depth of 70m, nearly 500 meters west of rams 4 and 5. Completely intact, the ram was sitting upright at the base of a large outcrop in a location inaccessible to dragnets and static nets. Heavy marine growth covers all exposed portions and octopus nesting revealed ram cavity artifacts such as iron nails, a tile fragment, and two bronze cheekpieces for Montefortino helmets and a bronze hinge that connected a cheekpiece to a helmet. Iron nails that were clearly used for timber attachments within the hull suggest that the ram has remained near the original wrecksite. There was minimal damage to the ram other than bending of the upper and lower starboard fins at the head, almost certainly due to it having rammed into the hull of an enemy ship; the presence of wood trapped between the upper and middle fins and middle and lower fins at the starboard side of also the head attests to this. Nails were also found within the cowl that were straight, indicating that substantial timber remains were deposited with the ram.

The cowl nosing bears a molded decoration and inscription. All of the ram’s surfaces were smoothed of manufacturing marks. A distinctive design feature is a concave profile between its upper and lower tail fins at the inlet. Both the Egadi 4 and the Egadi 6 ram feature a relief figure of winged female figure facing towards the starboard side is situated at the top of the outer face of the cowl. The figure is arranged upright to fit the narrow register provided by the cowl’s outer face. Her wings are folded downward and the laurel wreath is held above her head, nearly vertically, in her right hand. A sheave of wheat sits behind the figure, held in her left hand at its base.The female figure is assuredly one of two deities, or the version of a single deity, Nike or Victoria. It is my opinion that the image is Victoria based on several observations. First, the depiction of wheat in the image would more likely be associated with Victoria than Nike, who often had a palm leaf. Victoria’s origins are distinct from Nike’s, deriving from the Sabine goddess Vacuna who was also worshiped in Rome. Vacuna was an agricultural goddess that later became associated with numerous other goddesses including Minerva, Victoria, and Bellona.

M(arco) Populicio L(ucii) f(ilio) is listed at the top of the Egadi 4 Ram with the individual C̣(aio) Paperio Ti(berii) f(ilio) listed below (these same names are inverted on the Egadi 6 Ram). The Q.P postscript after the first name indicates that these two individuals served as Quaestores publici (elected public officials that dealt primarily in financial aspects). This position typically represents a first step for one seeking political office in the Republic. M. Populicius was known consul in 232 BC and may be identified with this individual so named as quaestor in 241BC. C. Papirius cannot, at this time, be identified with any known figure. This general interpretation of the inscription is predominately agreed upon by Jonathan Prag of Oxford University and Tommasio Gnoli of the University of Bologna.