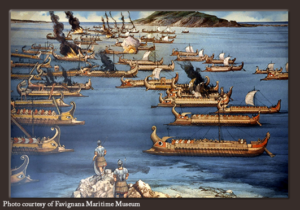 Site sector PW-B was designated after the finds within site sector PW-A in 2011. The earlier hypothesis that the material found in sector PW-B had been dragged from further south was given support by the concentration of finds, the majority in the original deposition areas, in sector PW-A approximately 6 km to the south-southeast. The finds at sector PW-B include the Egadi 2 ram, several Greco-Italic V/VI type amphora tops, and possibly the Egadi 7 ram. Unfortunately, the Egadi 7 ram was procured from fishermen’s nets and it is not certain or confirmed as to the location or time of its collection. It appears material from an area east of site sector PW-A, or from some area in between, was collected in fishing drag nets and deposited in sector PW-B once striking the beginning of the rocky outcrop zone.