One find that was re-acquired during the 2013 field season was a stone sitting alone on the seafloor near numerous amphoras in the northern section of PW-A. The stone is clearly worked along its center, in a rough manner, and is squared off on each side: the manner in which it is shaped indicates it was not sawn but hewn. No netting or line is found around or near it. Possible identifications include some type of fishing or net weight. Given the conspicuous notching along the stone objects mid-length another possibility is an anchor stock. 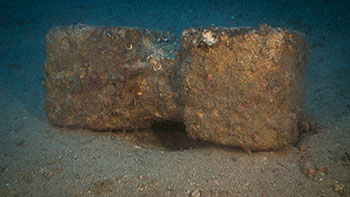 In Kapitan’s analysis of anchor types used in the ancient Mediterranean (Kapitan, G. “Ancient Anchors – Technology and Classification”, IJNA, 13.1:33-44.), he postulated the development of stone stocks on composite anchors. Additionally, Kapitan rightly pointed out the use of anchors for long periods of time and the crossover of anchor types in contemporaneous eras. Our knowledge of stone anchor stocks is poor due to a paucity of finds.There are several examples of the more developed stage from the Crotone Museum and from Tantura Lagoon, Israel. It is thus possible that this is an earlier ‘type’ of stone anchor stock as shown by Kapitan, or at least something similar. If so, then it is possible that this anchor stock is associated with the warships that sank here in the 3rd century BCE. Other considerations make this possibility viable. First, large lead anchor stocks with boxes and integrated to the shafts were a later development: their development began with wooden stocks filled with lead. This type was used between the 5th – 2nd centuries BCE. Iron anchors also make an appearance as early as the 5th century BCE, and are used sporadically; they become more common in later periods.

Later, stocks cast fully in lead were developed; these were typically removable stocks, rather small, and had a similar shape to the final stages of stone and composite wood/lead stocks, and used with a lead collar for the arms. This type IV anchor is thought to be associated with the 2nd century BCE – 4th century CE and associated with areas from N Africa and Sicily through the E Mediterranean. Dr Royal has also found a similar type anchor stock on two 3rd-century BCE Corinthian wrecks in Albania. Larger stocks of solid lead were soon developed that were affixed to the wooden shaft and were accompanied by a wooden collar. In the latest developmental stage lead anchor stocks were ‘hot cast’ directly onto the wooden shaft; a hole in the shaft allowed lead to enter in order to secure the stock and shaft. These final stages were typically in the early Roman Imperial era, a time when silver mining in Spain, Dalmatia, and other areas was to a point where lead was plentiful and cheap. Large composite lead-wood anchors along with iron anchors were found on vessels such as the Nemi barges and merchant vessels. There is a natural expected loss of anchors due to hanging in rocks, thus expensive materials were not typically used. Hence, it is during a period when lead became cheap due to its abundance that it was possible to cast large anchor stocks in the quantities suggested by the numerous finds throughout the Mediterranean. It is during the 3rd and 4th centuries CE that the use of iron anchors begins to increase significantly and dominates by the end of the 5th/6th century CE.

If the stone object discovered in sector PW-A is indeed a stone anchor stock, it would certainly fit with the development of anchors. Large lead stocks associated with composite anchors were not developed by the mid-3rd century BCE, and therefore are not associated with fleets of the First Punic war. It is most likely that the anchor types utilized by fleets of the First Punic War were wither stone stocks, lead-filled wooden stocks, or possibly type IV anchor stocks. The vessels on the seafloor were mostly, if not all, operated by the Carthaginians. The economic stresses of the long struggle with Rome during the course of the war placed a high premium on all resources including lead; a metal used in coinage, armor, fittings, as slingshot, etc. Thus type IV anchors are also unlikely to have been commonly used, whereas common stone was a plentiful and cheap resource at all times. Given this possibility, the stone object should be raised and a petrologic analysis performed, as well as examination for tool marks. Even if this object itself is not an anchor stock, the analysis indicates the most likely types of anchors that were associated with these fleets of the Battle of the Egadi Islands.