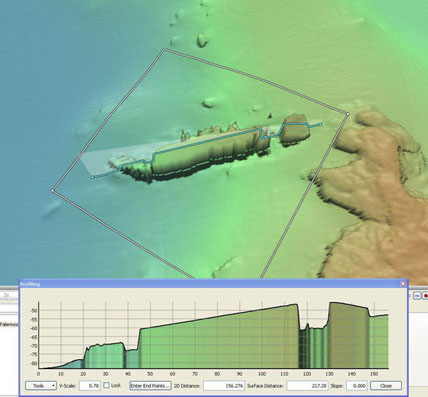 A large modern vessel was clearly discernible in the multibeam data near the small promontory fronting Orsos Bay upon initial examination. The dimensions and observable configuration of this modern vessel is consistent with a large freighter. A likely candidate for the identification of this wrecksite is the Italian freighter Rosandra that was torpedoed by British forces on June 14, 1943.

It is reported that this 8,000-ton ship was carrying food and supplies to Italian forces stationed in Greece. This wrecksite did not undergo ROV investigation this season as it was considered appropriate not to position the Hercules over the site at this time, and also considerations for the safety of the ROV. Additionally, ROV verification was concentrated further south in order to complete contiguous areas with previous seasons.