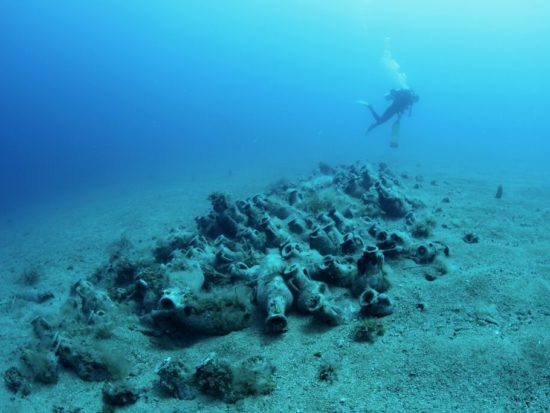 RPM Nautical Foundation was invited to Albania in 2004 by Auron Tare, the former principal investigator of the Butrint archaeological site and a tireless protector of Albania’s archaeological and cultural heritage. The Butrint site had been inhabited since prehistoric times, was declared a UNESCO World Heritage site in 1992, and became Albania’s first-ever national park. Tare now serves as World Director of the Albanian National Trust and Director of the Albanian Coastal Agency. Albania is still in the process of overcoming the decades of isolation imposed by the former communist regime of Enver Hoxha from 1944-1985. During this period, there was no scuba diving and virtually no boating activity, leaving potentially thousands of shipwrecks and sites undiscovered. Auron Tare is on a mission to bring Albania into the 21st century with ethical and scientific survey of the country’s coastline.

At Mr. Tare’s invitation, RPM committed to bringing Albania’s underwater cultural heritage under the protection of a modern, post-communist regime. RPM began mapping the offshore seabed for ancient and modern shipwrecks outside of Saranda, now a bustling modern city and the center of Albanian tourism. This large-scale survey, performed in conjunction with Auron Tare and Albanian archaeologists of the Albanian Institute of Archaeology (AIA), was made possible by the cooperation of the Albanian Ministry of Defense and Ministry of Culture and Tourism. RPM has also collaborated in Albania with its partnering organization, the Institute for Nautical Archaeology (INA); mapping efforts have expanded with the assistance of the INA research vessel, Virazon II. As part of the long-term collaboration between RPM and INA, the data generated by RPM’s discoveries of ancient shipwreck sites is provided to INA for evaluation to identify the most important sites worthy of full-scale excavation.

Survey efforts in Albania have thus far uncovered 28 wrecksites as well as several amphora mounds and additional finds. RPM has endeavored to progressively and systematically assess focal points for naval activity along the Albanian coast, including Vlore, Sazan Island, and Porto Polermo. RPM survey efforts will continue to move north to Durrës, a major port city.

Through RPM’s systematic survey of the Albania coastline, they have been able to shed new light on Cold War history. Directly following WWII, there was a bloody civil war in Greece between Communists and non-Communists. The western world was very active in support of the non-Communists but Yugoslavia and Albania were both controlled by Communist governments. The first part of the Corfu Channel incident began on May 15th, 1946 when two Royal Navy ships came under fire by forces on the Albanian coast. Neither of the ships were damaged but Great Britain demanded an apology from the Albania government, who instead believed that the ships had trespassed into their territorial waters.

On October 22nd, 1946, four Royal Navy ships were passing through the Corfu Channel to test Albania’s reaction and exercise their claimed right to innocent passage. As they passed close to the Albanian coast in the bay of Saranda, the destroyer HMS Saumarez struck a mine and was heavily damaged. HMS Volage was ordered to tow the damaged ship to a nearby harbor, but Volage struck a second mine and also became heavily damaged. Both of the ship’s bows were blown off, 44 men died and 42 were injured in the incident. It was claimed that the mines had been recently laid by the Yugoslavian government at the request of Albania. In what was the first-ever World Court case, the British government demanded reparations and the case was brought to the International Court of Justice, who decided that Great Britain was owed just over $2 million USD from Albania. Albania did not pay the reparations until 1993, after the Communist regime fell and the country sought to join NATO.

In 2009, RPM Nautical Foundation in conjunction with Albanian researchers found the bow segment of HMS Volage in the Corfu Channel under 50 m of water. Examination of the bow section revealed the hull pieces sank rapidly, and more importantly, that the ship was much closer to the Albanian coast than the British government had claimed. The British ships were, in fact, not in the internationally recognized route for innocent passage, but instead had deviated into positions provocatively close to Albanian land. This is just one of many examples how underwater archaeology, when performed scientifically and ethically, can change our perceptions of historical events.> Read Less

History of the Albanian Coastal Survey

RPM’s survey began at Albania’s southern border with Greece with a goal to complete a multibeam survey of the seafloor between the 25- and 100-m contour. A total of 15 wrecksites and other finds were discovered during this first season. Based on the number of modern wrecks in this bay, wrecks from the medieval and ancient eras undoubtedly lie beneath this sediment deposit. Also in this area, a late medieval vase was lying loose on the seafloor and numerous Roman-era amphora fragments were near the coast. One of the governing geologic processes is the outflow of the Butrint River. The river runs through the rough, rocky coast and empties into the sea with periodic highly erosive flows. A large amount of sediment that is moved by this river forms a thick deposit emanating from the river’s mouth. This sediment deposit is moved by the prevailing N-S current. It became clear that the high sedimentation rate that results from the river’s outflow buried wrecksites from the ancient to medieval periods.

During the 2010 field season, multibeam survey was continued north along coastal waters. With examination of viable anomalies from the 2007-9 season completed, verification efforts focused solely on those identified in the 2010 survey data. With the addition of a high-definition camera on the ROV, several previously discovered sites were videoed again. These sites included AB08-AF (Rodon wreck), AB08-AG (Qefalit Tile wreck), and AB07-AL (Volage). This new video allowed for significant improvement in all imagery of the wrecks, which resulted in better site recording and analysis. Three submerged sites were located during anomaly verification in 2010; however, none of these were from the ancient era. One large ship was clearly modern, another early-modern, and a third that has little diagnostic features but is likely modern as well. These finds brought the total to 28 wrecksites or submerged deposit sites located over four field seasons. Of these 28 sites, 8 are from the ancient period.

In 2012 the survey area continued to the section of coast north of Sazan Island towards shore, and also surveyed the inner near-coast section of Cape Gjuhëzës within Vlore Bay. Diver investigation was conducted in selected near-shore areas in order to include shallow-water material.

These field seasons featured the use of several different remote sensing technologies, including: autonomous underwater vehicle (AUV), sector scanner sonar and multibeam sonar. These techniques were utilized to overcome difficulties such as visibility and high gradients on the seafloor that render both bathymetric recording and sight recording difficult. The goal was to complete the area within Vlore harbor and extending past Sazan Island, out to the 100-m contour; in this case, the contour extends several kilometers offshore.

Along with this newly surveyed area, a major effort was made to record all previous sites with sector scanner sonar in order to better ascertain their shapes and dimensions. Many submerged sites along the Albanian coast are in softer sediments that become easily suspended in the water column and render visual recording difficult. As such, the sector scanner recording has greatly enhanced our understanding of these sites. More recent seasons have moved northward from Porto Polermo to the Karaburun Peninsula, Sazan Island and waters associated with the ancient crossroads and harbor at Vlore. Highlights of recent seasons include the Joni Wreck, a large, 4th-century wreck with Lamboglia amphora cargo; the SM-16, an early WWI Austrian U-boat; and the Princessa Marghareta, a WWI Italian battleship. Numerous additional sites are under investigation, including a site containing more than a dozen Archaic Corinthian amphoras. > Read Less

A Greek Archaic-era shipwreck off the Albanian coast

A Hellenistic-era, possibly Greek shipwreck off the Albanian coast

The remains of a wooden ship found along the Albanian coast

An undisturbed mound of Lamboglia 2 amphoras found off Albania

Two large armored vehicles along with their storage gear

Debris pile from a modern shipwreck off the Albanian coast

WWI warship found off the coast of Albania

A modern shipwreck found off the coast of Albania

A large deposit of Ottoman-period ceramics found off Albania