This site is formed by two separate deposits 60 m apart, each appearing to be a large armored military car along with their stowage gear. The tires remain on their hubs and in their original positions. Large metal objects between the wheels are undoubtedly part of the vehicle’s chassis or engine mounts, with the former being the most likely. As such, the vehicles are lying upside down. Each of the vehicles is covered with significant amounts of sediment and drag nets are accumulating on them. These vehicles may have been part of the invasion of Kakomea Bay by the British forces. 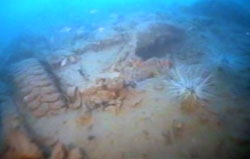