The jumbled debris here is primarily composed of large tires and 50-gallon metal drums. A propeller is also located at one end of the wreck, presumably the stern. A few other large metal objects are also located on the wreck; as they are heavily concreted it is not clear if they are cargo or ship items. Hull remains were visible during the initial investigation that appear to be metal bow structure. Perhaps this vessel dates to the mid-20th century, either associated with WWII operations or possibly with the Graeco-Italian conficts. It is also possible that this wrecksite is part of the same event as that of site AB08-AE. Images of the tires have been forwarded to the Imperial War Museum in the UK for review. 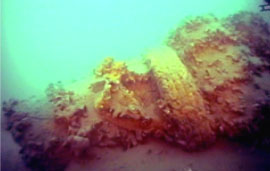