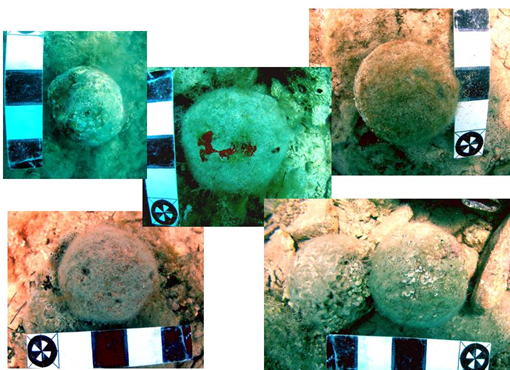 Located among the ceramic finds at Gjri Para Kakomese Bay were stone balls; these were present on both the southern and northern shores of the bay. Many of stone balls were loose in the sand, while others were adhered to the sandstone rock that forms outcrops in the bay. These stone balls were regular in shape but not homogeneous in their dimensions; however, the majority are between 12-18 cm in diameter. A possible identification of the stone balls is their being shot for a type of mangonel such as the Turkish manjaniq or Byzantine petrabolos. These artillery pieces were human-torsion powered devices that made their entrance into the Byzantine world from further east in the 12th/13th century CE. A pre-cursor to counter-weight artially, these machines were effective devices for a siege or defense of fortifications, and were also incorporated on board ships. The defense against ships, fired wither from fortifications or other vessels, such mangonels were recorded as effective in damaging wooden ships. Hence, the presence of stone mangonel shot is consistent with the date and context of the pottery. Further analysis of the stone will be necessary to determine its origin, and address their presence in the bay.