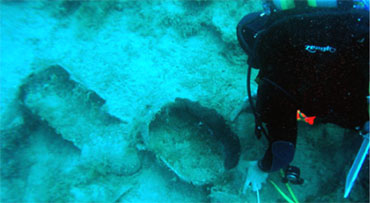 Dive investigation of site AB08-AH revealed a disturbed deposit on a sandy slope. The amphoras comprising this site number between 18-25 and are broken in large fragments. All amphoras are of one type, Tripolitanian I, and a sample fragment was raised for analysis (artifact AB08-0014). This isolated and concentrated deposit of amphoras from N. Africa confirm a cargo from a wrecking event. Portions of at least 10 amphoras were buried in the sand within an area of 8 m2, while others were lying up and down slope on the surface. A large amount of growth appeared on the amphoras, and combined with most being broken and buried, some of the material is difficult to distinguish. It is possible that more have rolled further down slope out of diver range. The thick, soft sediment is certainly hiding other portions of, or intact, amphoras. No excavation was made at this time to determine the extent of the buried amphoras.

There were no other amphoras of this type or era are located either scattered around the site or along the coastal waters several hundred meters in either direction of the site during dive investigation. It is possible that the main deposit of the cargo extends upslope from the concentration of buried amphoras and is covered with a layer of sediment. Additionally, as the robbing of sites is known to have occurred in this area, and this site is within diver depth, artifacts could be missing from plundering activities.