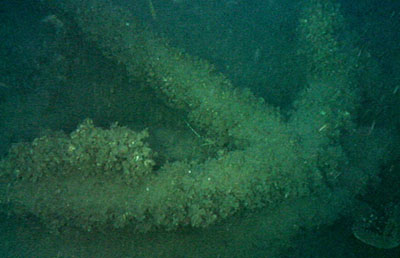 Just outside of the bay fronting Himara, a sizable wrecksite was discovered resting just off a significant slope. Given the location of this wreck and its orientation with respect to the line of the slope, it likely hit initially on this slope and came to rest at the bottom of it where the wreck settled into the sandy bottom. Most obvious on the wrecksite were cannons and a large anchor. Also present were what looked to be timbers in long runs at the northern edge of the site and many small objects including concretions. The site is overgrown and there is a particularly large amount of biofouling on all artifacts. The wrecksite was long and narrow, suggesting a moderate-sized sailing vessel with a run of dead flat along its sides. Included in the remains were 6-7 cannons deposited all along the site’s length; whether more are buried or have been removed by dragging is unknown. Each of the cannons was heavily overgrown and difficult to ascertain; however, basic features are a taper over their length, a cascabel, and trunnions positioned low at mid-gun. The degree of concretion and growth suggest the cannons are iron.

Another important artifact was a large anchor at the eastern end of the site (below right). This anchor had a general curve to its arms, with an angle at mid-arm, large palm flukes, possibly a square shank with a large ring at its end. Details of the anchor are also obscured by the tremendous amount of biofouling. Preliminary assessments confer a date of c1700-1750.