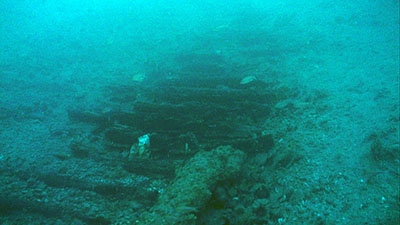 The remains of a wooden ship were located just SE of Porto Palermo in relatively good condition. Timbers exposed on the seafloor constituted the bottom section of the hull and included: keel, keelson, hull planking, and possibly a stringer. A deposit of stone nearby to the exposed timber section may be ballast rock.

Conspicuously there is little other material noted on the site or in the surrounding area. Given the exposure of the wood and the little degradation or overgrowth that is exhibited on it, the remains are likely from within the last half century. Occurrences of burial-exposure fluctuations for submerged ship remains are common in many areas as storms and current changes shift sediment along the coast. Hence, it is not impossible that the remains are somewhat older, perhaps from another century, and have been recently exposed.