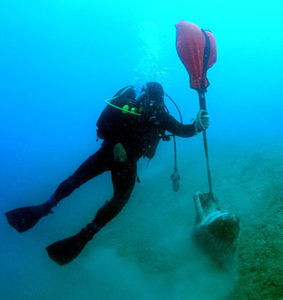 This site (AB08-AK) consists of two groups of 2-3 amphoras of the same type, Corinthian B; the groups are approximately 30 m apart and at the same approximate depth on the sandy slope. Some of these amphoras were mostly buried in the sand while others were only slightly buried. One additional amphora is loose atop the surface and further downslope.

A single coarsware pitcher with pinched spout was located near the amphoras, but no other artifacts were observed. Probing in the sand around the amphoras did not reveal a buried concentration of other ceramics; however, the depth was limited to that of approximately 20 cm by hand. An intact amphora was raised from this deposit (artifact AB08-0016), analyzed, and delivered for conservation.