The coastal waters of the Maltese Islands, central Mediterranean Sea, sustain a diversity of marine habitats and support a wide range of human activities. The islands’ shallow waters are characterised by a paucity of hydrographic and marine geo-environmental data, which is problematic in view of the requirements of the Maltese Islands to assess the state of their coastal waters by 2012 as part of the EU Marine Strategy Directive. Multibeam echosounder (MBES) systems are today recognised as one of the most effective tools to map the seafloor, although the quantitative characterisation of MBES data for seafloor and habitat mapping is still an underdeveloped field. The purpose of this study is to outline a semi-automated, Geographic Information System-based methodology to map the distribution of habitats in shallow coastal waters using high-resolution MBES data. What distinguishes our methodology from those proposed in previous studies is the combination of a suite of geomorphometric and textural analytical techniques to map specific types of seafloor morphologies and compositions; the selection of the techniques is based on identifying which geophysical parameter would be influenced by the seabed type under consideration.We tested our approach in a 28 km2 area of Maltese coastal waters.

We tested our approach in a 28 km2 area of Maltese coastal waters. Three data sets were collected from this study area: (i) MBES bathymetry and backscatter data; (ii) Remotely Operated Vehicle imagery and (iii) photographs and sediment samples from dive surveys. The seabed was classified into five elementary morphological zones and features – flat and sloping zones, crests, depressions and breaks of slope – using morphometric derivatives, the Bathymetric Position Index and geomorphometric mapping. Segmentation of the study area into seagrass-covered and unvegetated seafloor was based on roughness estimation. Further subdivision of these classes into the four predominant types of composition – medium sand, maerl associated with sand and gravel, seagrass settled on sand and gravel, and seagrass settled on bedrock – was carried out through supervised classifications of morphometric derivatives of the bathymetry and textural indices of backscatter, based on information from training stations. The resulting morphologic and seabed composition maps were combined to plot the distribution of the predominant habitats in the coastal waters offshore NE Malta, some of which are of high conservation value. Ground-truthing of the habitat map using ROV imagery and dive observations confirms that our approach produces a simplified and accurate representation of seafloor habitats while using all the information available within the MBES data sets.

Shallow coastal zones represent some of the most productive environments of the ocean and are characterised by complex mosaics of benthic habitats (Eyre and Maher, 2011; Gray, 1997). Knowledge of the spatial distribution, quality and quantity of these habitats is fundamental to our understanding of marine ecosystems and our ability to protect them from anthropogenic impacts (Jackson et al., 2001). Habitat maps have thus become a major tool in the assessment and monitoring of coastal marine systems, as well as in marine spatial planning, resource assessment and offshore engineering. Historically, seafloor classification has largely been based on the collection of physical samples and divers’ observations. In the last two decades, multibeam echosounder systems (MBES) have gained broad acceptance as a means to map large areas of the seafloor and delineate them into geological and geomorphological regions (Kostylev et al., 2001; Todd et al., 1999), to map the distribution of biological systems (Kostylev et al., 2003; McGonigle et al., 2009) and to identify archaeological components (Singh et al., 2000). The reasons for the increased popularity of MBES are numerous. First, MBES provide continuous acoustic coverage of large swathes of the seafloor; in comparison, sampling and diving cover significantly smaller areas and are therefore less cost effective (Kenny et al., 2003). Second, recent developments in marine acoustic technology have allowed MBES to match or supersede other types of conventional acoustic survey systems (e.g., single beam echosounder, side scan sonar) as a mapping tool (Brown and Blondel, 2009). This is particularly the case for multibeam backscatter data, which today give as much, or more, detail than is available with side scan sonar systems alone (Le Bas and Huvenne, 2009). The possibility of collecting high-resolution bathymetric and backscatter data simultaneously has thus led to a preference of MBES over side scan sonar as a marine mapping tool (Brown et al., 2011).

Seabed geology, in particular topography and composition, is known to influence benthic community structure and ecological processes at many spatial scales (Bourget et al., 1994; Cusson and Bourget, 1997; Guichard and Bourget, 1998; Kostylev et al., 2001; Snelgrove and Butman, 1994) and is becoming an important component of seabed and habitat mapping programs (e.g., Cochrane and Lafferty, 2002). Conventionally, segmentation of MBES data sets into seabed geological features has been carried out manually (e.g., Todd et al., 1999). Manual segmentation is inherently subjective, slow and potentially inaccurate (Cutter Jr et al., 2003), which is problematic in view of the subtle variations that may be present in acoustic responses, the large volumes of data being collected during modern surveys, and the increase in seabed mapping programmes worldwide (Blondel and Go´mez Sichi, 2009). There is thus a need to develop quantitative, computational techniques that are robust, accurate and unbiased (Cutter Jr et al., 2003). These techniques should rapidly transform large areas of spatially-complex bathymetric and backscatter data into simple, easily-visualised maps that supplement the interpreter with as much information as possible. Mitchell and Clarke (1994) were among the first to quantitatively characterise seabed geology using both bathymetric and backscatter data. The quantitative classification of MBES data is an advancing field, and several different approaches are currently under development and reported in the literature (e.g., Erdey-Heydorn, 2008; Lamarche et al., 2011; Marsh and Brown, 2009; Wright and Heyman, 2008).

The coastal waters of the Maltese Islands, Mediterranean Sea, are characterised by a paucity of detailed hydrographic and marine geo-environmental data. This is problematic in view of the requirement of the Maltese Islands to implement the regulations associated with the European Union Marine Strategy Framework Directive by July 2012. The Marine Strategy Framework Directive requires member states to carry out an initial assessment of the environmental status of their marine waters. Among the characteristics required to fulfil this initial assessment are: (i) topography and bathymetry of the seabed, (ii) predominant seabed and water column habitat type(s) with a description of the characteristic physical and chemical features, such as depth, structure and substrata composition of the seabed. Considering that Maltese coastal waters are also prone to various types of anthropogenic impacts, there is an urgent need to develop tools for the rapid and accurate mapping of the Maltese seabed and to produce good quality maps of its shallow seabed habitats.

The objectives of our study are therefore to: (i) outline a quantitative, semi-automated method to map the distribution of seafloor composition and morphology; and (ii) to test the applicability of this method in shallow coastal waters. We carry this out using high-resolution multibeam bathymetry and backscatter data, together with precisely-geolocated Remotely Operated Vehicle (ROV) imagery, dive observations and seabed samples, acquired offshore the Maltese Islands.

The Levanzo I Wreck, Sicily
Next Post: Project Archeorete Egadi 2011 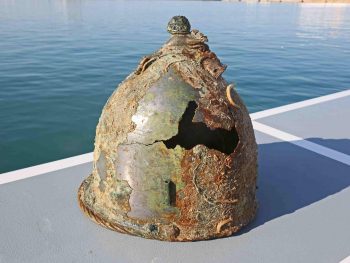 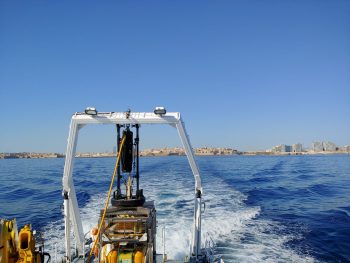 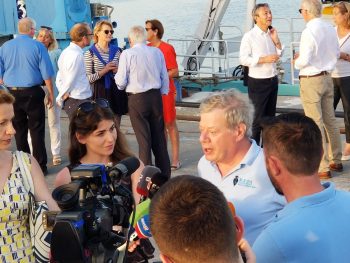