The survey program aims to conduct multibeam survey along the entire coast of Tunisia out to the 100-m contour, and eventually the 200-m contour. The principal methods for this program of work were remote sensing with a multibeam echosounder and verification of anomalies with a Remote Operated Vehicle (ROV). Both survey and verification was carried out with RPMNF’s research vessel Hercules, which is equipped with a hull-mounted multibeam echosounder sonar system and can deploy its ROV. Data from the multibeam operations was processed during, and directly after, the collection phase to produce three-dimensional models of the seafloor, which was then analyzed for anomalies. Once cultural material was located and positions recorded, a visual investigation ensued through the use of video cameras. Whenever deemed necessary, representative material was collected from the surface of the site in order to ascertain provenience. 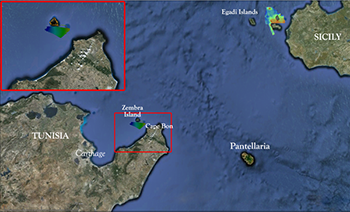 The southwestern side of the island is typified by a deep bay which descends sharply from the island edge. This bay has steep rocky edges that descend into a sandy seafloor. Water depths in this area were in the vicinity of 60 m and so comprehensive ensonification of the area was not possible. Four sidescan sonar anomalies were noted during the survey. Nine lines of magnetometer data totaling 81 linear km were recorded during this survey. When processed, five potential magnetic anomalies were noted. 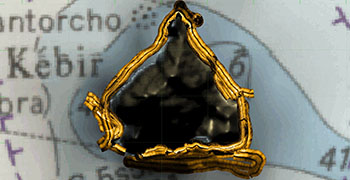 The shape and orientation of the anomalies were indeterminable as the background geology was quite complex. As a result the recorded anomalies could represent geological anomalies.In total, 124 linear km of sub-bottom profiler data was acquired during the survey. The sub bottom profiler indicated that there were varying depths of overburden sediment throughout the island. The distribution of the sediment and overburden rock was generally corroborated by the findings of the side scan sonar, whereby there was a covering of sandy sediment on the southern end of the island. This in turn gave way to gravel and rock deposits on the southwestern and western sides with a mixture of rock and sand on the northern and eastern sides of the island. The depth of overlying sediment varied in thickness from 1-4 m in the southern end of the island, whilst on the western side of the island, it was shallow varying from 0.5 m to 2 m.