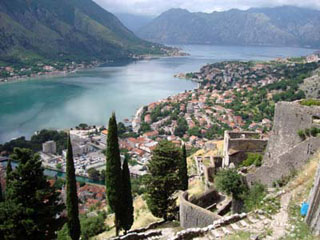 Partners: Center for Conservation and Archaeology at Cetinje, the Regional Center for Underwater Demining and Diving Training, Rescue, Relief and Control at Sea, Bijela, the Montenegro Ministry of Culture and RPMNF

This survey of an important stretch of coastline in the eastern Adriatic produced detailed bathymetric maps, locations of submerged cultural material, and documentation of significant site finds for the Ministry of Culture and the Center for Conservation and Archaeology. Project achievements include a GIS reference chart of the coast, site location information to assist Montenegro in protecting its submerged cultural resources, and educational opportunities for students.

Overview of the Montenegro Coastal Survey

Multibeam operations were first undertaken during June 2009 by the R/V Hercules in a survey area designated by the Regional De-Mining Center and Center for the Protection of Cultural Heritage, including the bays of Kotor and Risan and the area directly opposite the entrance to Tivat Bay.

During the 2009 season the entire combined areas of Kotor and Risan Bays, approximately 28 square kilometers, were surveyed with the 3002 multibeam echosounder sonar. There were 55 anomalies designated for further examination by the RPMNF ROV during the 2009 field season. Among the sites located and examined was a WWI submarine partially buried in the silty bottom. The wreck has large sections of the outer plating missing, at least two torpedo tubes along the NE side of the vessel, and a large hatch or gun emplacement. Historical research on WWI-era submarines in the Maritime Museum in Kotor indicates the site may be the scuttled Austro-Hungarian submarine U-72, or a British submarine (possibly the H2) that was also lost in the area.

The 2012 field season continued from Cape Platamuni into Budvanski Zaliv and extended the survey area out to the 100-m depth contour. Sites from 2010 and 2011 were also re-visited in order to obtain additional ceramic examples. One new ancient site was located during in 2012, bringing the total to 22 wreck sites for the 4 field seasons.

Survey operations during the 2013-4 field season continued from Cape Platamuni into Budvanski Zaliv, and again extended the survey area out to the 100-m contour. A total of 10 ancient wrecksites have now been located between the entrance to Boka Kotorska and Budvanski Zaliv.

During the 2015 field season continued southeast to the area of Budva and St. Nikola Island and included further examination of previously identified sites.

Discussions are now ongoing regarding resumption of the project in 2020.
> Read Less

Ancient shipwreck on the Montenegro coast carrying a shipment of tiles

Several fragments of amphoras discovered during ROV operations off Montenegro

Ancient shipwreck on the Montenegro coast carrying a shipment of tiles